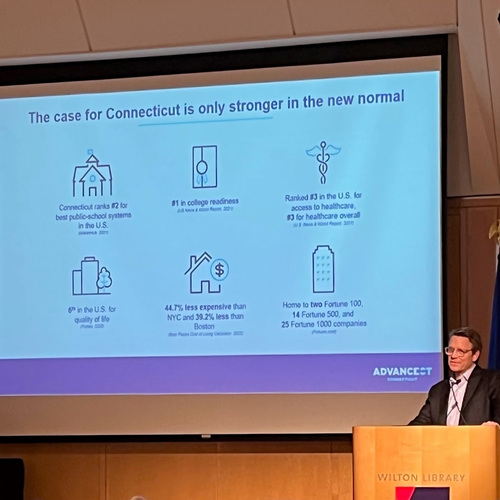 On Tuesday, April 5, local business owners, residents and city officials gathered in the Brubeck Room at the Wilton Library for our annual economic forecast meeting.

This year’s event was led by Peter Denious, CEO and President of AdvanceCT, a private, not-for-profit economic development corporation, which drives job creation and new capital investment in Connecticut through efforts to attract, retain and expand businesses, in close collaboration with the State, regions and local communities. the partners.

Peter’s presentation focused on the positive changes Connecticut has seen over the past year, noting that the state has moved up 11 spots nationwide as a favorable place to work and own a business. He pointed out that Connecticut is ranked number 2 in the United States for best public school system and number 3 in the nation for access to health care. It was also discussed that Connecticut has grown by more than 40,000 people since 2019, which is the highest population growth in over a decade.

Connecticut’s economy is on the rise and the creation of new businesses in the state is a positive indicator of expanding economic activity. AdvanceCT and the State’s Economic Development Team have several business and community investment initiatives underway, namely the Innovation Corridor Challenge, Arts and Culture Funding, Challenge Grant Program communities, a new $50 million green technology investment fund, targeted support for small businesses with funds for upskilling and retraining workers in the manufacturing sector, and public and private funding of which 50% will be aimed at underrepresented business owners.

We encourage business owners and community members to reach out to our partners at AdvanceCT, access these valuable resources, and find support to further strengthen the local Connecticut and Wilton economy. They can be reached at:

The Chamber would like to thank the Wilton Library Association and its staff for their partnership with our community events.