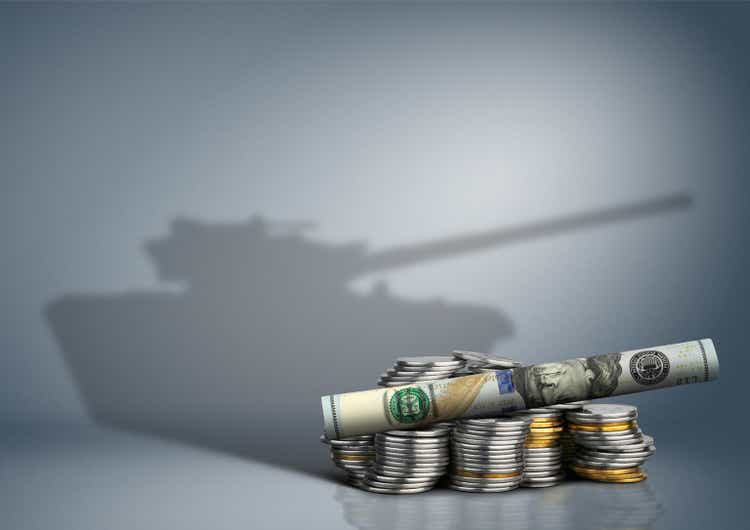 The war in Ukraine has a modest impact on the economic growth of the DM; Business confidence plummets

Preliminary data from the PMI survey showed only a modest impact of the war in Ukraine on current economic growth in the world’s largest developed economies in March. Headwinds from the invasion, soaring energy costs, a broader rise in cost pressures and ongoing supply chain constraints were more than offset by momentum from continued reopening savings due to containment measures related to COVID-19.

However, business confidence for the year ahead has fallen sharply, particularly in Europe, and further intensification of price pressures and supply bottlenecks resulting from the war are expected to deepen the global crisis. of the cost of living.

Survey data therefore points to an increased risk of slowing growth and rising inflation in the months ahead. However, much will depend on the extent to which the waning pandemic continues to stimulate economic activity and offset the headwinds of rising geopolitical uncertainty and inflation.

Growth in developed countries is accelerating as economies reopen

Business activity continued to grow strongly in the developed G4 economies of the US, Eurozone, UK and Japan in March, with the preliminary ‘flash’ PMI survey signaling the rate of expansion fastest since November of last year.

The recovery was led by the services sector, where growth in activity accelerated for a second consecutive month after the virtual stagnation caused by the Omicron wave in January. Service providers posted the strongest growth in four months as economies continued to open up following COVID-19 containment measures. Despite tougher lockdown measures in mainland China, virus containment restrictions around the world in March were the weakest since the pandemic began in early 2020, giving a major boost to consumer and business services. travel and the hotel industry in particular.

Manufacturing growth also accelerated, reaching its highest since last August, also supported by the rebound in demand as well as some easing of supply chain constraints from those seen in the second half of the year. last year.

Only the United States is experiencing stronger growth

the UK recorded the strongest growth of the four largest developed economies for the third consecutive month in March. Despite a slight moderation in the rate of expansion, output growth in the UK was among the strongest recorded in the history of the survey, reflecting a rebound in the services sector fueled by the almost complete removal of restrictions related to the pandemic. However, the slowdown in the rate of expansion was mainly related to lower demand due to concerns over the war in Ukraine and the related exacerbation of existing pressures on the cost of living.

Likewise, eurozone growth lost some momentum, mainly due to the impact of the war on confidence and prices, but also slowing manufacturing growth due to worsening supply chain bottlenecks supply due to disruption of supply from Ukraine.

United States growth, on the other hand, accelerated to an eight-month high in March, following the Omicron-induced slowdown seen earlier in the year. Few survey respondents reported an immediate impact on production and demand from the war in Ukraine, generally citing the opening of the economy as having spurred growth in demand and production in the manufacturing and manufacturing sectors. services. Like the UK and the Eurozone, the US has seen covid restrictions eased to the lowest so far in the pandemic.

In Japanproduction fell for a third consecutive month as the country continued to battle the new wave of COVID-19, although the rate of decline moderated to only a marginal contraction, in part due to the fact that virus control measures were not raised further during the month.

While Russia’s invasion of Ukraine had only a minor negative impact on business output in the four largest developed economies in March, its impact was more evident on business confidence. Across the G4, business expectations for output over the next 12 months fell to the lowest since December 2020, slipping in all four economies, but most notably in the eurozone. Future expectations hit 17-month lows in the Eurozone and the UK, with 14- and five-month lows recorded in Japan and the US respectively.

Anecdotal evidence from the surveys found the invasion exacerbated existing concerns about supply chains, prices and a potential slowdown in economic growth as the rebound from the pandemic faded.

The surveys also revealed numerous reports of higher costs resulting from the war, especially for energy, which added to the existing severe pressures on input costs resulting from the pandemic. Across the G4, input costs have risen at the fastest rate since comparable data first became available in 2009. Near-record highs for input costs were seen in the United States, in Japan and the United Kingdom, while a new 25-year high was recorded in the euro zone. Importantly, as all four economies continued to face strong manufacturing cost pressures, new record highs were set for service sector input cost inflation amid rising energy costs. , transport and wages.

These higher costs translated into higher selling prices, the inflation rate of which also reached a new all-time high in the G4 economies on average. Retail price inflation rates reached new highs in the UK and the Eurozone, with a near-record increase in the US, although inflation remained more subdued in Japan, mainly due to weak demand.

Another ramification of the war in Ukraine has been worsening supply chain delays in the eurozone, which is closest to the conflict. After showing signs of easing in recent months, delivery times from eurozone suppliers lengthened in March to the greatest extent since last November. Delivery delays have also increased in Japan, partly related to new lockdowns in China.

More encouragingly, delivery delays have eased in the US and UK, to the lowest since January 2021 and October 2020, respectively, largely due to an easing of bottlenecks related to the supplies related to the pandemic. However, in all cases, supply chains have lengthened to degrees not seen before the pandemic apart from unusual events, and an overall increase in supply delays in the G4 suggests in mean high and sustained pressure on material prices in the coming months.

With PMI data signaling stronger economic growth and mounting inflationary pressures in March, at face value, surveys strengthen the case for further monetary policy tightening, particularly in the case of the United States and the UK.

However, the big question for policymakers in the coming months will be to what extent the continued reopening of economies and the waning of the pandemic will provide enough of a boost to offset the headwinds of uncertainty and price increases caused by the war in Ukraine, as well as the current cost of living crisis, the trend towards monetary policy tightening and the reduction of fiscal stimulus compared to emergency measures in the event of a pandemic . Given the decline in business sentiment captured by surveys, the risks appear to lean towards slower economic growth but rising inflation in the months ahead.

Editor’s note: The summary bullet points for this article were chosen by the Seeking Alpha editors.