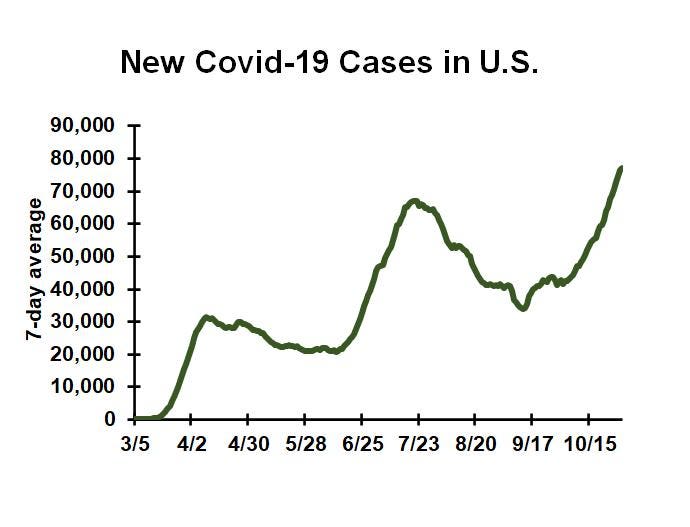 The third wave of Covid will not sink us: economic forecasts

The United States is in a third wave of Covid-19 cases. The first caused the economy to fall sharply, the second probably delayed the economic recovery, but what about the current surge? Most likely, spending and employment will stabilize despite the increase in the number of cases. The economy will continue at below average performance until a vaccine or treatment is proven.

The recession that began in March was sparked both by government foreclosure orders and by individuals’ voluntary choices regarding activity. Restaurant visits in Oregon, for example, were about half of normal just before the governor’s order to shelter in place on March 16. Across the country, people have voluntarily adjusted their behavior, with further changes due to government orders.

From an economic forecast perspective, the question is whether the current surge will result in either lockdown orders or more voluntary isolation. In fact, the summer upsurge in cases has done little to worsen economic activity, although some governors or mayors have tightened activity restrictions. Retail spending in July, at the height of the second surge, rose sharply, but growing somewhat slower the following month. Growth might have been even stronger in August had it not been for the fears fueled by the summer surge.

The declining death rate we are seeing today is good news, both for patients and for the economy. Some of the improvement is false, showing up in stats because we underestimated the instances where testing was scarce. This made the death-to-case ratio appear higher than it really was. But part of the payoff is real, thanks to doctors and nurses discover better treatment practices for Covid-19 patients. And part of the decline in mortality comes from the now infected population, who are now younger and healthier.

Due to the undercoverage of cases early in the pandemic, hospitalizations may be a more consistent measure of disease incidence. These data show a third increase, but not as severe – yet – as the two previous outbreaks. The half-full view is that it’s nothing we haven’t experienced before. The half empty opinion is that we are fed up with this.

News articles about the increase in the number of cases and hospitalizations elicit little public reaction, as measured by Open Table data on seated guests. Various daily or weekly measurements are displayed by calculated risk each week, and most of the show business as (new) usual despite the third wave.

The third push isn’t helping the economy at all, but it’s not that bad so far. Colder weather may be worse for economic activity, making alfresco dining more difficult in much of the country. December is usually the peak month for restaurants, but that may not be the case in 2020. Fortunately, December for restaurants is not the peak month for, say, jewelry and clothing stores.

Repeating my economic forecast for April 6, “The most likely path is a V that turns level before reaching its previous peak, somewhat resembling a square root symbol.” The economy will come back and pass its previous peak when we have a vaccine or a widely effective treatment. Until then, the decline and worsening of the pandemic will have little impact on our below-normal economic performance.