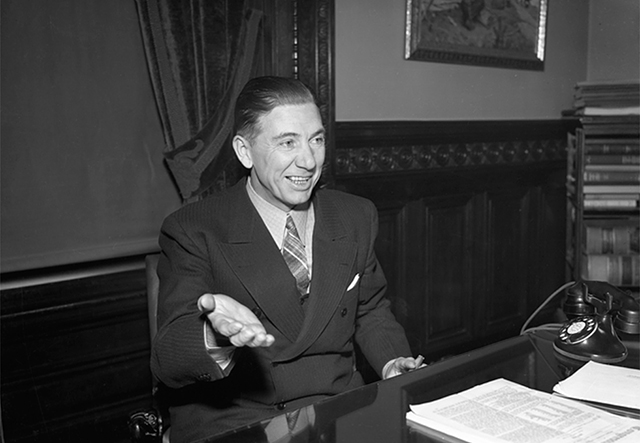 On September 14, Governor Tim Walz issued Executive Order 21-31 establishing a Governor’s Council on Economic Expansion to “reimagine the economic future of Minnesota and recommend policies and strategies for the public, private and public sectors. nonprofits that will support shared economic prosperity â€.

In 1944, amid the turmoil of World War II, another governor created a similar commission to examine Minnesota’s future and make policy recommendations. Governor Edward Thye issued an Executive Order on May 10, 1944, establishing the Minnesota Resource Commission to “study the fundamental underlying factors relating to economic conditions and trends which affect the public welfare of the people of Minnesota.” The commission’s work, and the fate of its policy recommendations, provide lessons that are relevant for today: short-term thinking, unfortunately, often runs counter to long-term thinking and long-term needs.

Origins of the commission

The roots of the Minnesota Resources Commission go back to 1934 and the Great Depression. Governor Floyd B. Olson, responding to a call from the federal government to create state-level planning agencies, formed the Minnesota Planning Board. The key role of this council was to implement and coordinate federally funded measures to alleviate depression (eg, Works Progress Administration construction projects) and to generate plans for future economic development.

The article continues after the advertisement

Strategies to promote economic development were seen as particularly important as government statistics and business surveys indicated that Minnesota had fallen behind its neighbors in terms of average incomes and other measures since the First World War. The board was also concerned the depression could worsen Minnesota’s relative economic position further. So the board launched a variety of research studies that looked at how Minnesota stacks up against its neighbors and the nation.

Harold Stassen took office as governor of Minnesota in January 1939, and the planning council immediately caught his attention. He requested a report on his activities and received on February 9 a “Progress Report to the Governor on [the] Minnesota Resource Commission. The new name was an effort to separate the work of the commission from an association with five-year plans or anything that smacked of socialism. The report identified research the commission should continue to pursue, studies that could be completed, and noted that the commission should move from managing publicly funded projects to “focusing on projects that would mean the development of jobs and income in private enterprise “. However, the outbreak of World War II pushed the work of the commission to the margins.

From 1943, planning for a post-war world began to take shape nationally and internationally. Edward Thye, who took office when Stassen resigned to join the Navy in April 1943, launched a similar forward-looking effort in Minnesota using the Minnesota Resources Commission as a vehicle. As I noted earlier, Thye issued an executive order in April 1944 to focus the commission on post-war economic planning and appointed a new chairman for the commission, someone who had no intention of let his job languish or be ignored: James Ford Bell, who ran General Mills, one of Minnesota’s largest corporations.

Bell acted quickly. He immediately hired a New York-based industrial consultancy firm to synthesize the research already completed by the commission, and they delivered a three-volume “State of Minnesota Economic Analysis” in February 1945. The report, along with a summary compiled by Bell, outlines the economic history of Minnesota from 1870 to 1940, a detailed examination of the state of Minnesota’s economy in 1944, and a general set of recommendations for future policies. It’s a long-term reflection: Examine the past to better understand the present and prepare for the future.

At the top of Bell’s recommendations was tax reform: â€œThe current tax structure is outdated, inequitable and inefficientâ€. To address these issues, the commission focused on reducing state income tax rates, eliminating personal property tax (a tax levied on household goods, livestock, machinery, etc.) and inventory) and enacting a new state sales tax. The committee believed that these reforms would be fairer and provide a more stable and comprehensive tax system. In addition, their larger goal was to help Minnesota catch up with its neighbors through more effective government and investments in the people of Minnesota, especially in education.

Bell and his fellow commissioners urged the governor and legislature to act quickly in 1947, but the legislature did not adopt any of the commission’s recommendations during the 1947 session. It took another four years (1951) for the Commission to act. legislature to repeal personal property tax, and another twenty years (1967) until the legislature enacts a 3 percent sales tax on Gov. Harold LeVander’s veto.

During the same period, governors and other state officials formed new commissions and committees to study the same issues over and over again: the Minnesota Tax Study Commission (1954), the Governor’s State Tax Study Committee (1962), the ‘Upper Midwest Economic Study (1964). Since 1967, there have been two fiscal study commissions (1985 and 1999) as well as numerous reports from organizations ranging from the League of Citizens to the Itasca Group. All of these study groups came to a similar conclusion: the key to Minnesota’s prosperity was to invest in the state’s citizens.

There is a pattern here. As a state, we generally know what needs to be done. For example, we needed to eliminate the obsolete personal property tax in the 1940s and today we need to expand broadband statewide. Thinking in the short term causes us to drop things, or worry that investments are too expensive. Long-term thinking indicates that investing money now will bring better returns in the future. Yes, a college education is expensive, but the lifelong earnings will be much higher. Yes, broadband access for all Minnesotans will be expensive, but it will pay off for education, business, and many aspects of modern life.

The article continues after the advertisement

What needs to be done

Minnesota went from a state of below average income in the 1930s to an above average state in the 1970s thanks to high rates of labor force participation (especially among women), investment in human capital (such as education and health care) and investments in physical equipment. capital (both by private donors and public bodies). Walz’s new Phase I report from the Council on Economic Expansion repeats this formula, as all panels since the Minnesota Resources Commission have done. The specifics are different, but the long-term recipe for economic growth is the same: investing in our state and its people. It is a long term thinking.

We know what to do. The problem is that our long-term goals are plagued by short-term thinking and deep political and ideological divisions. The board’s term ends on July 1, 2022, but when it releases its final report, it is only the beginning of a long, slow process of study, education, discussion, argument, protest and general citizen involvement which is the hallmark of a healthy policy. If the governor wants a different outcome, he will have to spend his political capital and work hard to implement the council’s recommendations during his tenure. Otherwise, it will be up to future governors and legislatures to start all over again.

The Minnesota Historical Society supported the archival work of the Minnesota Resources Commission through a Legacy Research Fellowship.

MinnPost’s detailed and independent news is accessible free of charge to everyone, without paywall or subscription. Will you help us continue this way by supporting our nonprofit newsroom with a tax-deductible donation today?