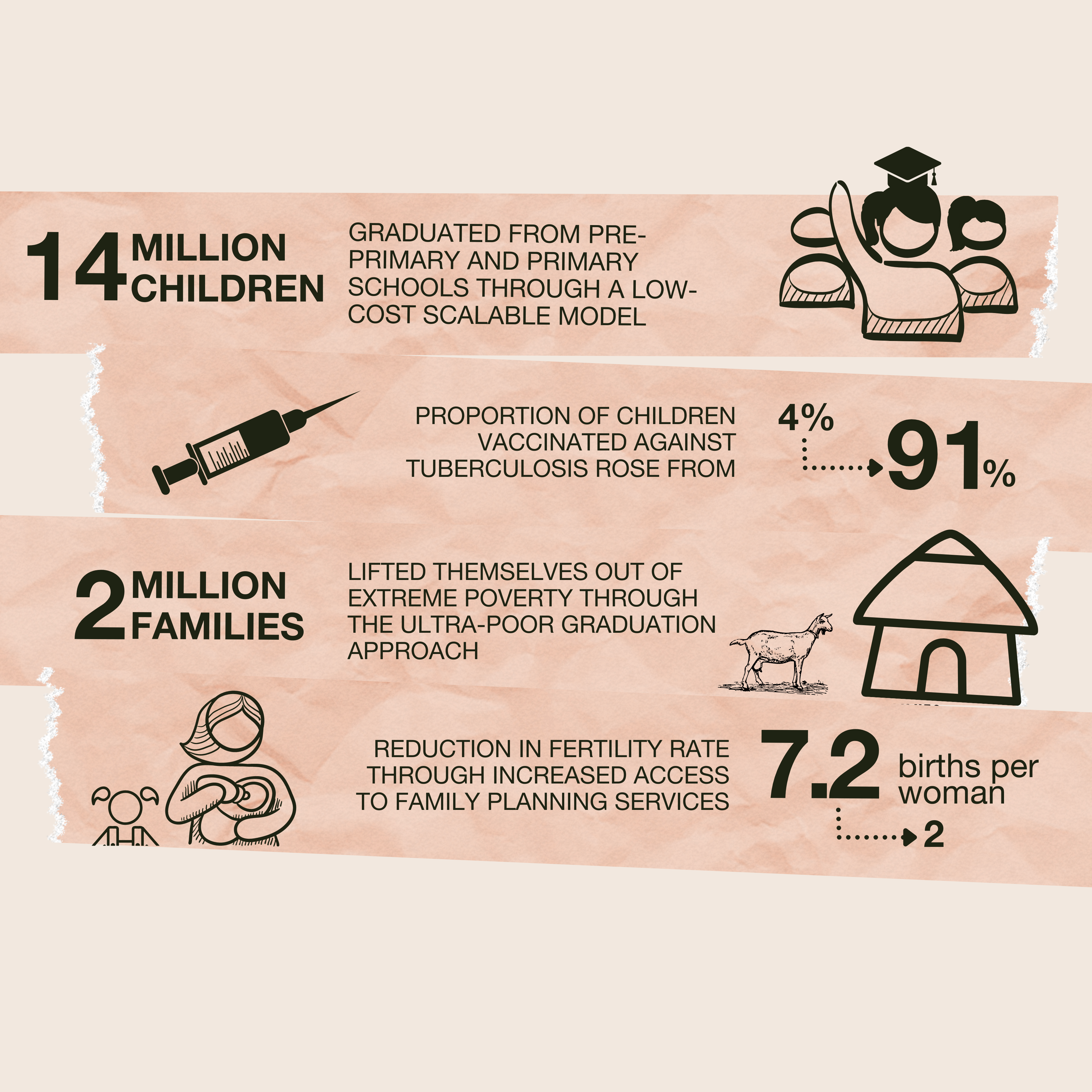 Development must change. Bangladesh can show us how

Even in its most remote corners, the world is changing. Global unrest, climate change and growing numbers of refugees are blurring the lines between development and humanitarian response. Migration to cities causes societal changes; technology creates both opportunity and division; and the financial landscape is going through a tectonic shift.

To meet these challenges, development must be done differently. The sector risks losing its relevance if it does not know how to adapt. Lessons from Bangladesh offer examples of how to stay relevant.

Since its founding in 1971, Bangladesh has emerged from crushing poverty to be proclaimed by the World Bank in 2020 as “a model of poverty reduction”. It achieved the highest cumulative GDP growth in the world from 2010 to 2020 and is now on track to become a developed country by 2041. The paradox of Bangladesh has been extensively researched and the role of non-governmental organizations organizations (NGOs) in this progress is well documented. . What is not studied enough is why their approach has been so successful.

The traditional approach to development across the world has been quite one-sided; designed and dictated by decision makers in the North. Implementation strategies are imposed on local partners, who are in turn held accountable to them by these decision-makers, who also decide on the measurement of impact. Aid recipients are seen as ‘beneficiaries’ whose primary role is to be grateful for the aid. Once the project is over or donor priorities change, everything changes. Long term development is short term.

The approaches of international development organizations such as BRAC and the microfinance lender Grameen have provided an antithesis to this model. They fundamentally challenge the way development programs are designed, funded and scaled. They have brought a sense of entrepreneurial zeal, courage and ambition to the sector, which has led to concrete results – BRAC, for example, has expanded its work to a level where almost every one of Bangladesh’s 170 million people has received services from it or one of its affiliates.

First of all, there was a lot of room for NGOs in Bangladesh. Successive governments have seen and understood the positive results of NGOs’ social innovations, and that these results have complemented their work in providing services to citizens.

This work favored simple and frugal solutions for complex challenges. It has received support from international institutions, governments and philanthropic actors, but the support has been channeled into self-sustaining programs and social enterprises that have been developed and rooted in local communities.

Secondly, key to BRAC’s approach is its very different way of seeing people; it sees them as active contributors to economic growth. BRAC believes that the way to overcome poverty and inequality is to invest in the potential of people living in poverty and fill the critical market gaps they lack. Too often capitalism looks at the base of the pyramid and sees millions of potential consumers. In doing so, it misses the opportunity to tap into their creativity, engage them in productive livelihoods and connect them to markets – or create new ones.

Thirdly, by taking a problem-driven approach, rather than a proposal-driven approach, and by looking at problems holistically, has produced a steady stream of innovations to meet critical needs in multiple communities from multiple dimensions. In this regard, it has been crucial to involve women from these communities as catalysts for change, in positions such as teachers, health workers and artisans.

Finally and especially, there is the tacit realization that real and sustainable development is not a five-year project cycle. It takes time. Long-term development is about building capacity, raising awareness about harmful behaviors and giving people the tools to change their own future. Investing time to deepen programming, being on the ground, and having a deep understanding of community dynamics is crucial.

Does this long-term, interconnected programming mean more expense? No. It means greater value. Until the UK abruptly cut its foreign aid budget, which had a profound impact on BRAC, BRAC’s strategic programming accounted for 17% of the UK’s global impact on extreme poverty and 13% of children completing primary education, while costing 0.5% of its annual development budget.

Long-term, problem-oriented and human capacity-driven programming is effective. BRAC’s Ultra-Poor Graduation model has provided nearly 10 million people with access to training and incentives to lift themselves out of extreme poverty and become self-reliant. BRAC’s one-room school model, which comprehensively addresses all the reasons why parents do not send their children to school, has brought education to 14 million children, the majority of whom are girls.

BRAC Bank’s bKash, Bangladesh’s leading mobile financial service provider, has become a daily spoken Bengali verb in just 10 years, transacting nearly $2 billion every day. Grameen Trust bet on mobile phones in Bangladesh in the mid-1990s, transforming the rural economy by establishing Telenor, Bangladesh’s most popular mobile phone company. Both Grameen and BRAC have the fastest growing microfinance entities in the country, providing financial services to nearly 15 million clients at one of the lowest interest rates for microfinance institutions in the world. .

Long-term development is about building capacity, raising awareness about harmful behaviors and giving people the tools to change their own future.

This programming approach can also lead to the creation of social enterprises that generate vital funding to fight poverty and inequality. For example, BRAC Bangladesh’s annual expenditure on development programs is approximately $150 million, and BRAC itself is now the largest contributor to this. In Bangladesh, BRAC’s Aarong connects 65,000 artisans to markets to create the country’s most popular lifestyle brand. Aarong Dairy connects farmers who often have only three cows each to otherwise inaccessible markets; it now accounts for a third of the country’s dairy market.

What does all this mean for the sector? At a time when development challenges are greater than ever and financial constraints are severe, development organizations need to be bold, ambitious and precise in identifying problems and solutions, much like the private sector. We need to be patient, pro-poor and human-centred, like the public sector. More than ever, we need to work strategically, hand in hand, with private actors and governments, to ensure comprehensive and scalable solutions.

The COVID-19 pandemic has increased poverty and inequality around the world. Bangladeshi NGOs offer crucial lessons for all. It’s time to challenge the status quo and do development differently in the world.