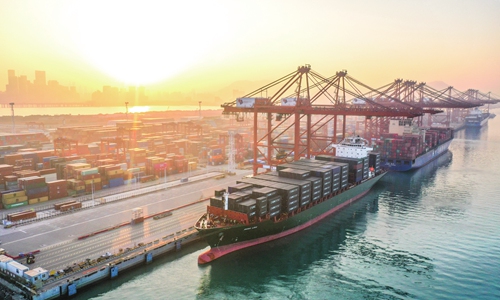 Additionally, the Chinese economy was helped in 2021 by an exceptionally strong trade performance. China’s annual imports increased in dollars by 30.1% in 2021 and exports increased by 29.9%. There were therefore signs of a slowdown in the very rapid growth of trade at the end of 2021 – even if this was less pronounced than for GDP.

Taking a three-month average, to avoid distortions caused by single-month figures, China’s annual export growth fell from 30.7% in June to 23.3% in December, while the rate of annual import growth fell from 37.1 to 19.5%. Whether a trade performance as strong as in 2021 can be repeated in 2022 clearly depends not only on conditions in China, but also on the state of the global economy.

Therefore, in addition to assessing China’s growth in 2021, it is necessary to look at domestic and international facts to see the economic outlook.

Starting with the international economy, there are strong reasons to conclude that global growth in 2022 will be weaker than in 2021. This is due to both general economic conditions and the highly inflationary side effects of the type of plans stimulus that have been launched by Trump. and the Biden administrations. Unless inflationary pressures spiral out of control, the United States will impose a significant tightening of US monetary policy, which will put downward pressure on growth in the world’s largest economy.

Similar pressures are likely in the European Union – the other major center of the world economy besides the United States and China. The effects of this US inflationary pressure therefore constitute a significant risk for the global economy.

Examining this danger in detail, in December US consumer price inflation hit 7.0% – the highest rate in 40 years. Asset price inflation was even higher – in October 2021, according to the latest data, US house prices rose 19.1% year-on-year, which was even faster than the 14, 1% before the subprime mortgage crisis. But such inflation was predictable given the nature of the stimulus packages launched by the Trump and Biden administration.

On fiscal policy, US government spending increased by 9.7% of GDP in 2019-20, the largest increase in US history outside of World War II. US monetary policy has been similarly expansionary, with the annual increase in M3 money supply peaking at 27% – an increase almost twice as high as at any other period in the past 60 years. years.

This huge fiscal and monetary stimulus in the United States was almost entirely focused on the consumer sector of the economy. Between the last quarter of 2019, the last before the pandemic, and the third quarter of 2021, the latest data available, US consumption increased by $1.571 billion. By comparison, net fixed investment in the United States, which takes depreciation into account, rose by $22 billion, only 1.4% of the increase in consumption. In short, a huge increase in demand was injected into the US economy while almost nothing contributed to the supply. Under conditions where there was no large spare capacity in the US economy, and a huge surge on the demand side of the economy, with no significant increase on the supply side, meant that an inflationary surge was inevitable – and duly took place.

What led to such a serious mistake in economic policy?

From a theoretical point of view, it was the misconception that consumption is a contribution to economic growth. But that’s just plain wrong. Consumption, by definition, is not an input into production. Thus, the huge increase in consumption launched by the Trump or Biden stimulus packages has not helped the supply side of the US economy.

Politically, the reason the Trump or Biden stimulus packages were all about consumption was because the United States is a capitalist economy – that is, by definition, one in which the private sector has a dominant role in the means of production. This capitalist class, therefore, has no problem with the state stimulating consumption, but it does not want it to intervene in investment, i.e. in controlling the means of production.

For this reason, the only time the United States pursued an investment-led, supply-side stimulus policy was during World War II – when America’s top priority was to defeat Japanese militarism and Nazi Germany. In 1944, 79% of fixed investment in the United States was in the public sector. This achieved the greatest economic growth in US economic history.

Between 1940 and 1944, the United States grew by 15% per year, the fastest short-term growth recorded by a major economy in the history of the world. But this huge state intervention in the US economy went against the interests of private capital – the share of wages, relative to profits, in the US economy has been rising for three decades and income inequality and wealth was greatly reduced. Therefore, barring mortal peril such as war, American capital was determined that there would never again be a large-scale state-directed investment program, even if it resulted in economic growth. slow in the United States.

Given the size of the US economy, the tightening of US monetary policy, generally expected by the Federal Reserve in March at the latest, will inevitably have consequences that will not be limited to the United States. An increase in Federal Reserve interest rates will put upward pressure on interest rates in many countries. It is also likely to put upward pressure on the dollar exchange rate. This combination will have negative economic consequences for a number of countries.

It is to be hoped that the world will unite to manage these financial risks, including through the IMF and the G20, but nevertheless these risks will continue to exist and sufficient multilateral action cannot be guaranteed.

This situation clearly has economic consequences for China. Economic growth for 2021 has reached forecasts. But there was strong downward pressure at the end of the year. Meanwhile, China’s trade was slowing somewhat and there are negative trends in the global economy. Therefore, it is difficult to escape the conclusion that there must be a domestic stimulus in 2022 if negative trends in the global economy are to be avoided.

But it is also important to understand the adverse lessons of the Trump or Biden stimulus packages and therefore to note that a stimulus in China only on the demand side of the economy, i.e. on consumption, will have negative consequences. Instead, the stimulus will need to meaningfully include the supply side of the economy – that is, investment.

In summary, China in 2022 will face more negative global economic trends than in 2021. This will clearly require more domestic stimulus in China while forcing to avoid the mistakes of the Trump or Biden administrations.

John Ross is a senior researcher at the Chongyang Institute of Financial Studies at Renmin University of China. He was previously director of economic and trade policy for the Mayor of London. 2022-01-23
Previous Post: Global policymakers face a complex set of divergent economic challenges in the year ahead
Next Post: Economic forecasts for 2022: the great balancing act