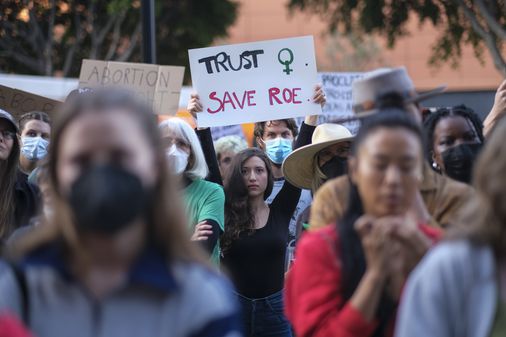 Access to abortion is credited with expanding the role of women in economies and labor markets around the world. The ability to access safe abortions is what keeps many American women from falling into poverty, according to decades of research.

Low-income black and Hispanic women are disproportionately affected by the restrictions, as they are more likely to lack funds and the ability to take time off work to travel out of state for treatment.

“It’s just hard to overstate the likely magnitude of the effects,” said Jason Lindo, professor of economics at Texas A&M University in College Station. “The evidence is very clear that this is going to lead to negative outcomes on things like women’s educational attainment, women’s participation in the labor market and measures of economic success.”

If Roe were overturned, the impact would be immediate for women seeking abortions in states that decide to limit or prohibit access. But the economic fallout would last a lifetime, weighing on personal finances, state social safety nets and potentially labor market participation.

“Disrupting constitutional rights that have been protected for decades will hurt us all, not just women,” she said.

More conservative states are expected to ban or severely restrict abortion, while liberal regions are likely to maintain abortion rights.

Indeed, 26 states home to an estimated 36 million women will ban or severely restrict abortion, if Roe is overthrown, according to Planned Parenthood president Alexis McGill Johnson. The decision would force some women into unplanned pregnancies while others turn to higher-risk options.

“No court decision can stop abortion. Period,” she said.

Texas provides insight into the post-Roe world for women across the country — and the financial implications. In September, a law came into effect banning abortions after embryonic heart activity is detected, usually around six weeks and usually before a woman knows she is pregnant.

Since then, the majority of women seeking abortions have traveled out of state for treatment, according to Anna Rupani, executive director of Fund Texas Choice, which funds women seeking out-of-state abortions.

“A lot of our clients work paycheck to paycheck and can’t afford to take time off work to get an abortion, or they take time off and don’t get paid,” Rupani said. More than half of the organization’s clients already have children and cannot afford more, she said.

Escaping an abortion wasteland is harder than crossing state lines

Travel costs for women have risen more than 30% as clinics in Texas and neighboring states fill up and clients regularly travel more than 1,000 miles for an abortion, in California or New York, according to the group.

Meanwhile, for women who are forced into an unwanted pregnancy, the result can be a life of poverty, according to Diana Foster, research director at Advancing New Standards in Reproductive Health, a program of the Bixby Center for Global Reproductive Health. . at the University of California, San Francisco.

“It’s not good for the economy,” she said. “You are taking women out of the workforce and forcing women to raise children who don’t have enough resources for housing and food.”

According to the Turnaway Study, the largest economic study on the financial impacts of abortion, which Foster led.

Five years after being denied an abortion, women are four times more likely to be living below the federal poverty level than those who had the procedure, the study showed.

Another study found that a decade after being denied an abortion, they had more bankruptcies, evictions, and lower credit scores. That’s according to a January research paper from authors including Sarah Miller of the University of Michigan.

Opponents of abortion argue that access has its own economic cost, as it means a smaller population and labor pool. This shrank the country’s population by about 11%, reducing gross domestic product by $1.17 trillion and weakening innovation, according to John Mueller, who studies the intersection of economics and religion at Ethics. and Public Policy Center, a Washington-based conservative institute.

However, access to abortion does not necessarily impact population growth: according to a 2021 study published in the journal Contraception, many women who seek abortions end up having children later in life when they are financially prepared for it.

Widespread restrictions on abortion would disproportionately harm women of color, who already lag further behind their white counterparts in the United States. Even in today’s tight job market, black female unemployment is roughly double the national average.

Black and Hispanic women are more likely to seek abortion and resources to fund care, and to live in states where abortion will be made illegal, which means they are more likely to suffer the consequences economics, according to Elizabeth Ananat, professor of women and economics. at Barnard College.

“We know that children who grow up in poverty earn less, end up more often involved in justice systems, and perform worse on a number of measures,” she said. “These are costly and long-term results for the economy.”