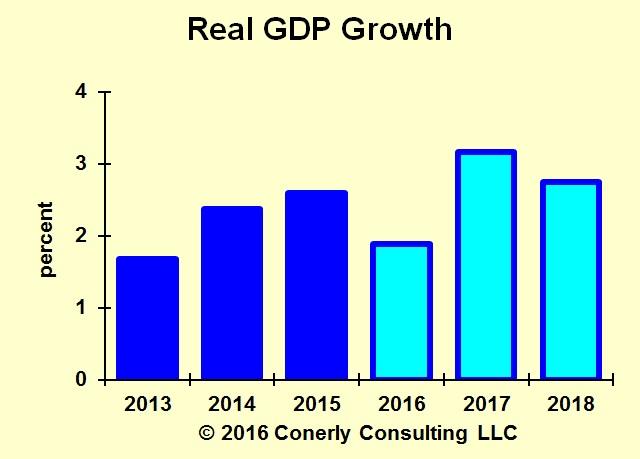 The US economy will experience a slight cyclical rebound in 2017, then return to a lower growth rate more in line with long-term potential. Gross domestic production, adjusted for inflation, has grown at a fairly moderate pace over the past three quarters. But jobs are growing at a moderately good rate, with an unemployment rate below five percent. Some of this year’s negative factors will reverse, allowing a rebound next year.

The strongest part of the GDP reports was consumer spending, up 3.8% over the past 12 months. This compares to a 3.6% gain in take-home pay, resulting in a minuscule drop in the savings rate. Consumer attitudes are stable at a good level, a little above the long-term average. I expect consumers to continue to increase their spending in line with their income.

Non-residential construction continues to increase thanks to private sector activity. Public construction is flat. National averages make less sense in this industry, as an excessive vacancy in one market can hardly ease the tightening in another, but expect U.S. totals to rise.

Although businesses are spending on construction, they are reducing other capital expenditures. Commands for machinery and equipment have fallen five percent in the past 12 months. Part of the decline is a direct result of reduced drilling and development for oil and natural gas, but non-oil companies are also reluctant to spend money to increase capacity. Expenses to reduce operating costs are more common.

Low expectations for future sales appear to be responsible for much of the decline in capital spending. The Conference Board Survey of CEOs has been depressed for four quarters now. If the U.S. economy meets my expectations, however, more productive capacity will be needed and capital spending should recoup some of the ground lost in 2017.

Inventories are being managed more closely this year. This reduced GDP growth in the second quarter, but it’s actually a positive sign. Too much stock is dangerous both for business and for the economy in general. A tighter inventory-to-sales ratio limits the risk of a recession and also bodes well for boosting future inventory needs.

Federal government spending was stable, while revenues fell due to weak corporate profits and lower personal income tax withholding. Defense spending is likely to increase once the new administration, regardless of which candidate wins, prepares a new budget. Otherwise, federal money will be tight.

State and local governments across the country are increasing both income and spending at a moderate pace, just over two percent unadjusted for inflation. Slow economic growth does not generate many tax gains.

Exports have been the weakest part of the economy for the past two years, but they are improving now. The decline in the dollar since the start of the year has helped. Look for slightly stronger exports in 2017.

The overall economic outlook for 2017 looks better than this year. 2016 suffered from the short-term impact of reduced oil drilling more than the long-term benefit of cheaper gasoline. The economy also felt the impact of the stronger dollar, as well as the change in inventories. Next year, these negatives should not be any worse, if not better. Next year’s best performance will be compounded by continued gains in consumer spending, as well as residential and non-residential construction. Business capital spending is expected to be less negative and may even turn positive.

Economic strengths will not produce a boom – some of the problems listed above will persist, along with low productivity growth and low labor market participation of some demographic segments. Nonetheless, next year will be brighter than 2016, followed by a return to a more sustainable growth rate.