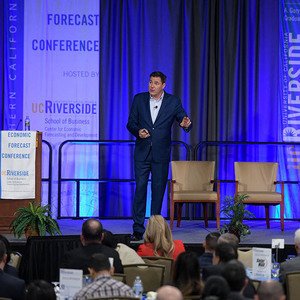 The Changing Economic Outlook: Worrying About the Bad Recession

Join some of the nation’s top economists as they help decipher the gains and pitfalls of the year ahead!

Christopher Thornberg
Director, Center for Economic Forecasting and Development
Forecasts for the United States and California

The economies of the United States and the Inland Empire have recovered from the pandemic-induced recession, but the excessive fiscal stimulus that has been doused across the country during the crisis has left us in overheated and of overstimulation. With aggregate demand at an incandescent level and the country operating at full capacity, inflation is soaring and interest rates are rising even as the trade deficit has reached its second highest level on record.

These clear symptoms of overheating are widely interpreted as signs of a short-term recession. According to renowned economists at the Center for Economic Forecasting, the real risks lie further down the road. But while the collective focus remains on the immediate threat of recession, unresolved imbalances within the US economy continue to grow, raising the risk of a very real recession in the future. And while the Inland Empire’s economy has boomed by most measures, the wider fortunes of the region will be at stake when that day of reckoning arrives.

Join some of the nation’s top economists and get answers to today’s most pressing questions: